Grand Mart Group, a Qatar-based fast growing retail chain, made its entry into the Kingdom of Saudi Arabia with the opening of its first outlet in Dammam on April 17 in 2014. The hypermarket primarily targets families with a special focus on expatriates’ requirements. The facility will cover an array of services like foodcourts, children’s play area, exchange and salon.

The Hypermarket has an assortment of more than 45,000 articles on its shelves. The retailer is one of the fastest growing groups in the GCC with presence in retail, wholesale, travel and tourism, restaurants, bottled water, bakery products, IT services, refrigeration and air-conditioning solutions, etc.

The retail division aims at enabling the end customers to benefit the maximum, from the company’s expertise in distribution of goods and services. The company started retail division in 2005 by opening its first supermarket in Souque Al Faleh called Pinoy Supermarket which was primarily focused on Filipino customers. Soon enough another venture in Al Khor called Sealand Hypermarket was launched, now both of these stores renamed as Grand Mart. 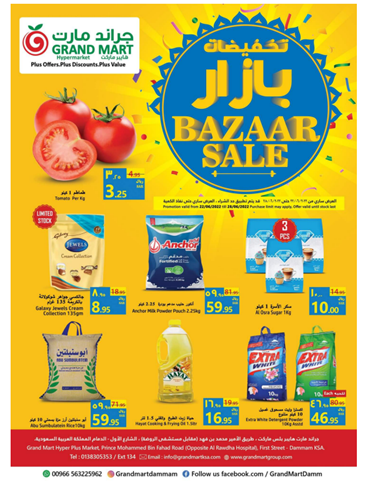